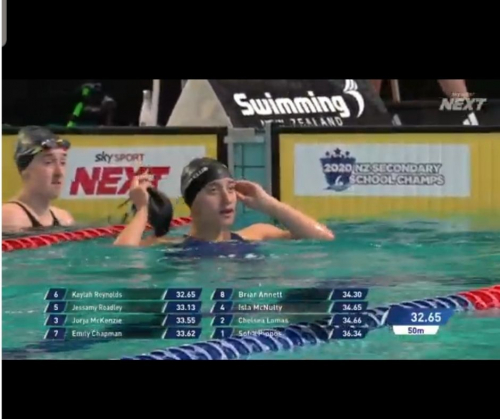 “The competition was fierce and there were so many talented athletes,” says Kaylah, 13, who attended the three-day swim meet with mum Joanne Reynolds.

Kaylah qualified for eight events at the championships held in Hamilton. In her favourite event, the 200m freestyle, she stripped seven seconds off her personal best – a phenomenal achievement considering the race takes only a little over two minutes!

Humble and quietly spoken Kaylah is proud of her achievements. She says it was equally thrilling to watch world class New Zealand swimmers.   “I was lucky enough to watch some New Zealand records broken.”

Joanne says the school age championships were live streamed meaning Wairoa whānau could watch the event. “As she powered through the heats the camera zoomed in on Kaylah a few times. It was amazing for us all to see her rise up national ranks to now be sitting just outside the top 10 in one of her events.”

Joanne says Kaylah set high goals for the Hamilton meet. “Winning doesn’t always mean you need a medal or podium finish. Achieving your own goals makes you a winner.”

Kaylah is a Quality Roading and Services-sponsored athlete. The last time the company caught up with her was just after lockdown when the young athlete was grappling with the disappointment of cancelled swim meets and nowhere to train.

“I want to use that event to qualify to swim at the 2021 New Zealand National Age Group Championships in Wellington.”

The goal is all the more compelling after qualifying for that event in 2020 only to have her hopes dashed when unable to compete because of Covid-19 cancellations.

In a demonstration of Kaylah’s fitness and commitment the teen recently took part in the Hawkes Bay under-14 representative netball programme held over four weeks. Kaylah was awarded a coach’s award and was selected for further netball development – an opportunity she’s had to turn down as it clashes with her swimming goals.

He says travelling to specialist training and events is expensive for Wairoa athletes and QRS continues to support Kaylah with some of her costs.

“We’ve been impressed with Kaylah’s motivation to keep striving for higher goals and prove to herself that her hard work wasn’t for nothing.”

“Athletes like Kaylah get a chance to compete at national events by setting realistic, achievable goals, then working hard to attain them one step at a time despite setbacks like lockdowns. We’re thrilled to be a part of her sporting journey.”