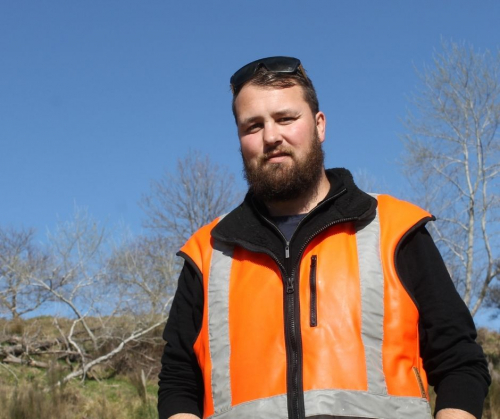 IT was a bit of a homecoming for Chris McGregor when, in September, he reported for work as Quality Roading and Services' new project engineer.

Hometown boy, Chris, started his career with QRS in 2008, signing on as a labourer the moment he graduated from Wairoa College.

“It was just supposed to be a job before I went to university but I never actually left,” he says. “The work was really interesting and the company supported me in my learning, from getting my tickets to drive just about anything to completing my certificate in engineering.”

Now, three-and-a-half years later, he's back and loving being out on the work sites.

While Chris carries out his new role, QRS will also support him in completing his Diploma of Engineering.

He says further broadening his skill base is just what he wanted. “That was why I left in the first place but it's great to be back so I can further build on my skills and education,” he says. “QRS has so many different projects in the pipeline and they really give me the opportunity to grow, both professionally and as a person.”

On his days off, the father-of-one is a mad-keen hunter and diver and, with his twin brother Daniel, has represented New Zealand in barefoot skiing.

With most of his family within reach in Wairoa or Gisborne, Chris says he feels right at home in northern Hawke's Bay but it's his oldest brother Justin, who lives in Australia, who he credits as being his major influence.

“He trained as a civil engineer and works on really big projects so, as a young guy, I found that to be really inspiring,” he says. “That's something I'd love to do but there is plenty to keep us going here.

“Just a couple of weeks after rejoining QRS I'd already been involved in three big projects and there is heaps of work to come, so I'm looking forward to getting stuck into that.”