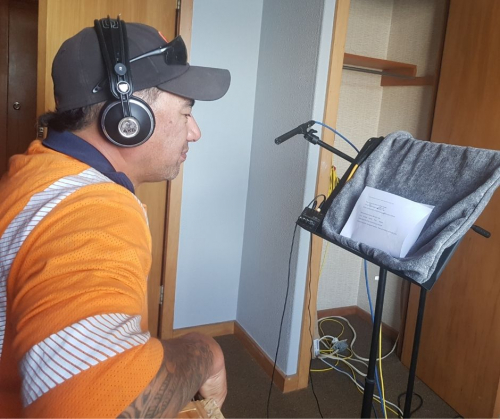 "Yeah I was surprised to be asked,” says Justin, Ngāti Kahungunu, Tainui. “I didn’t know anything about voiceover technique so it’s been an interesting experience.”

In the video, Wairoa plays host to stunning footage of QRS staff and machines working around the district. From Mangapoike Rd to Mahia, viaducts to valleys, Wairoa shines.

The powerful baritone voice of Justin Kaimoana is edited over the top of the sweeping landscapes.

“It wasn’t too bad,” says Justin. “I was a bit nervous at the start but once you are in the recording room you start to find your voice.”

Justin was coached to do the voiceover by local film maker Zach Stark from Wylde Creative.

Internationally raised, Zach worked in film studios in Hong Kong before making Wairoa his home. Zach is a director at Korou Digital. New Zealanders also know Zach for his local music videos and desire to raise the profile of Wairoa, making him a perfect fit to make the video.

Zach says while most people know what a voiceover is, less well known is how to do it properly.

“Big budget advertisements and branding videos usually pay professional actors to voice their stories but in Justin, QRS has found a voice with the perfect feeling and tone. “You just can’t replicate that. It’s East Coast to a tee and locals can hear the difference.”

Zach and Justin made the recording in Zach’s Clyde Hotel studio in November, and after a few false starts Wairoa’s own Morgan Freeman found his pace and emotion!

He had encouragement and awhi from QRS colleague Joe Winiana, and as Zach continues to make video content for QRS he lets slip” I’m not allowed to say too much but locals will be seeing and hearing more of Joe soon too!”

During Justin’s recording session Zach played the visuals of the branding video so Justin had a sense of what he was narrating.

“He just got better and better with his diction. It was clear concise, and most importantly, married with what we were all seeing on the screen so well.”

Zach loved Justin’s earthy timbre. “I probably shouldn’t be surprised though. We had literally pulled him out of his crew for the morning and he was sitting there in his work gear. I don’t think many voiceover actors have delivered their lines in hi-vis!”

Justin has been with QRS since October 2018. He has a Bachelor of Arts and is an exponent of mau rākau (weaponary) and oratory on the marae. Previously Justin was a teacher’s aide at Wairoa Primary School, and before that was a prominent staffer at AFFCO Wairoa.

When he’s not in the studio, Justin says he enjoys working at QRS and respects the skills displayed by his senior work mates. A quick learner Justin has already moved his way up in the roading company and earned a number of operator’s licences and tickets.

Justin is co-owner of CrossFit Wairoa with wife Melissa. He coaches rugby and loves nothing more than spending time on the rugby field and netball court side lines watching his young family compete.

His kids have joked with him that perhaps he should become a DJ. “Hmmm. I don’t know about that! Just as long as management is happy with it, then I’m happy.”