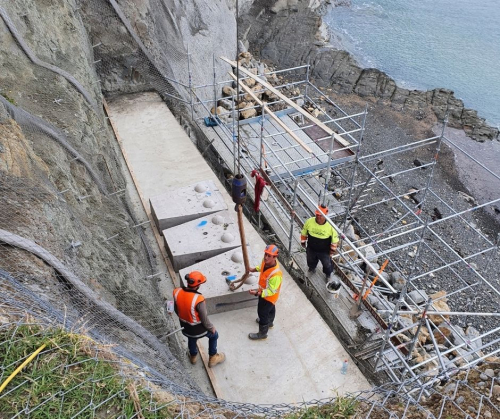 LIKE a Lego wall built with a giant mechanical hand, support for a drop-out on Mahia East Coast Road is taking shape and on track for completion by mid-February.

Known as the Rangitahi Drop-Out, the slump occurred in August 2019 when erosion undermined an old wooden crib wall, causing part of the road above it to drop into the sea.

To protect the road from further damage while engineers developed a plan for repair, Downer -- with support from Quality Roading and Services (QRS) -- installed a pre-fabricated Bailey bridge.

Then, in May this year, Wairoa District Council (WDC) secured support to fix the drop-out from the government's post-Covid Shovel-Ready fund.

QRS construction manager Mike Wilson says that because of site restrictions, the preferred option was to rebuild the structure holding up the cliff face stretching down to the beach.

But this time, he said, it would be built to last, with both materials and construction techniques designed to see it last for generations to come.

With the site blessed and ready for access in September this year, the job got underway to turn the design by Land Development and Engineering (LDE) into a reality.

The design called for the installation of reinforced concrete beams and ground anchors to create a tie-back system for holding in place massive prefabricated concrete blocks, so QRS called in subcontractors Rock Control (to abseil down to drill in the anchors and install nets to prevent rockfall); Duracrete (to manufacture the huge blocks); and Lattey Group (to do the heavy lifting).

First to go in were the anchors, followed by Shotcreting and rocks to create a solid revetment at the base.

Then the Bailey bridge – which was blocking heavy machinery from accessing the site – could be removed.

“We had to crane down everything from diggers to bins filled with tonnes of rocks so the bridge had to go,” says project engineer Chris McGregor, who led the QRS construction team.

To carry out the build, workers used a solid concrete platform halfway up the cliff face as “home base”. At first, they accessed the site via scaffolding anchored on the beach below. As the wall got higher, however, they altered their practice to reach the work site from the road above.

And as the build end-date approaches, further Shotcrete will be added to secure the wall for decades to come.

“This coastline gets really pummelled by the sea so it was important the new wall could deal with that, as well as any other erosion,” Mike Wilson says. “The result is a structure that should be around a lot longer than I will be.”

With positive and negative detailing, the blocks mimic the design of Lego but the construction is certainly not child's play; together, the 204 blocks made to cover the 108-square metre cliff face weigh over 200 tonne . . . close to a tonne a piece.

And as well as achieving its aim of supporting the road, the wall also looks good, the differing size and shapes of the blocks give a natural effect that is added to by a specially-imprinted pattern.

“This project has required a huge amount of expertise,” says Mike Wilson. “Overall, there would have been hundreds of people either directly or indirectly involved which, as well as getting the job done, is exactly what Shovel-Ready projects are supposed to achieve.”

The demands of moving equipment to make way for passing traffic has made for a considered work programme but Mike Wilson says the safety of all involved has been paramount.

And despite that slow and steady pace, the team are well on track to get it done by the middle of February.

“The way everyone has worked together has been amazing,” he says. “That has enabled us to manage a pretty tricky job safely, on time, and looking to achieve a great result.”

– Known as the Rangitahi Drop-Out, the Mahia East Coast Road slump occurred in August 2019 near the Waitapatu Culvert, where coastal erosion undermined an old wooden crib wall, causing part of the road above it to drop into the sea.

– To protect the road from further damage while engineers developed a plan for repair, Downer -- with support from Quality Roading and Services (QRS) -- installed a pre-fabricated Bailey bridge.

– Then, in May this year, the project qualified for support from the government's post-Covid Shovel-Ready fund with Wairoa District Council (WDC) securing $2.5 million for three tasks: repair of the drop-out; replacement of the Patangata Bridge at Whakaki; and the realignment of Nuhaka River Road.

– At the time, WDC said the drop-out was “a real battle with nature” that it had struggled to be able to afford to repair. “It is an important road in our community,” WDC said, “and sustainable access is linked with the aspirations of Rongomaiwahine, our local community and local businesses.”