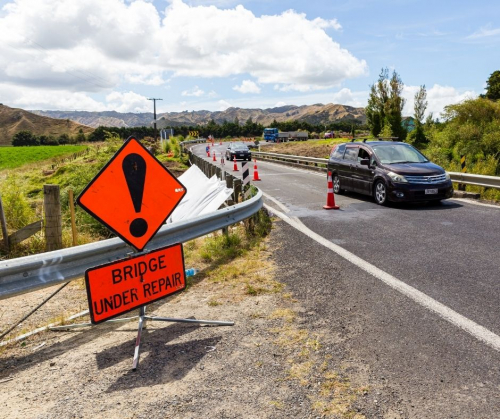 AS a young girl Davena Morunga can remembering travelling over Tahaenui Bridge blatting out The Beatles’ Yellow Submarine in her parents 1980s Datsun 120Y.

“Our car was yellow and me and my siblings always used to sing that song. I’ve been going over that bridge for years and we’ve all known, all the locals have, to take it carefully because it can be dangerous.”

Now, 35 years on, Davena, Rongomaiwahine is project supervisor on the Tahaenui Bridge widening project with Quality Roading and Services and she couldn’t be happier with the improvements being made.

In April 2018 The Tahaenui Bridge was reduced to one lane after a crash between a New Zealand Defence Force LAV and a people mover.

The $1.2 million bridge upgrade is one of several special projects within the Connecting Tairāwhiti programme and forms part of a $12b NZ Upgrade Programme funded by Government.

Worked started in January with a blessing at the construction site led by hapū from nearby Manutai Marae.

Davena says the project has been welcomed by locals. “We’re getting a lot of good feedback from passers-by. It’s nice to be part of this upgrade as we all know that it’s an area where caution is needed.”

Traffic control will be in place periodically during the project. Work on widening the bridge and the road that connects to the bridge is expected to be finished by the end of June.