This is how WE do maths and tech! 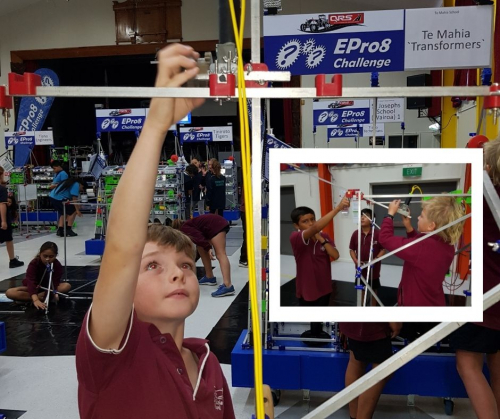 “We are so into it at Te Mahia School!” Mr Hoek told us, as he watched his two Te Mahia School teams take on competitors from six other primary schools at the Wairoa Epro8 challenge at Wairoa College last week.

The EPro8 Challenge is a creative fun day which pits school teams against each other in engineering and construction challenges. It’s the fourth year the event has come to Wairoa and each year Quality Roading and Services has thrown its support behind it.

Mr Hoek says Te Mahia School values science, technology and maths, and students are regularly exposed to the excitement of the subjects. Class-based EPro8 challenges throughout the year play an important part.

Last year Te Mahia was one of many local schools to receive an extensive toolbox of EPro8 equipment to learn with. The toolboxes feature gears, pulleys, axles and more. Online EPro8 challenges keep the kids and teachers engaged year-round.

We tried to chat with eight-year-old Arthur Wrenn from the Te Mahia Transformers team during the competition. Given the time-constrained challenge he was working on he could only spare a minute!

“I know what we should do, we should take that bit off and make it longer,” he told his teammates as the clock counted down on the challenge.

Arthur and his team were making a motorised painting machine. The paintbrush snapped, and cogs broke, but the team which included Tarquinn Zaid Greening, Nalu Miura and Jack Parker, held it together long enough to place fourth equal in the competition.

Arthur, who owns tonnes of lego and wants to own a pet shop when he grows up, says he loves building. “Today was fun, there were a few arguments, but it was good.”

Quality Roading and Services people and capabilities manager Jeremy Harker was on hand to present the prizes to competition winners.

QRS continues to support the event because “it’s built on skills and teamwork, things that we value here at QRS. Getting stuck in, using your brain, and trying to solve problems. Congratulations to everyone who took part, we will be back again next year.”

EPro8 event manager Andrew Thiele says putting the event on is possible only with the support of QRS.

“The classroom-based toolboxes and last week’s event cost money and schools these days simply don’t have the budget.”

“Thanks to QRS for its fantastic support. The event was a huge success.  There was a great atmosphere and the teams did really well.”