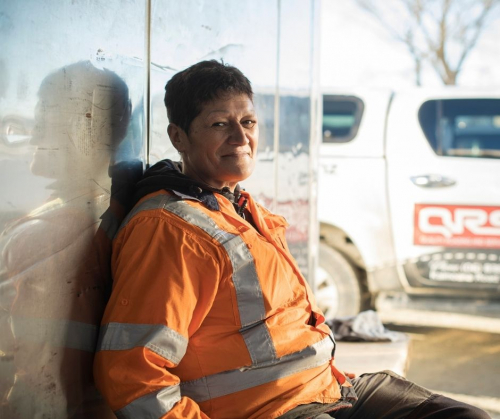 LIFE has come full circle for Joanne Mitchell, and she couldn’t be happier.

After leaving Wairoa College in the late 1970s, Jo's first job was in traffic control for an all-woman Ministry of Works team, and now she's back on the roads with Quality Roading and Services.

“I do work hard to create a happy atmosphere at work and take the rest of the team with me,” she says. “And I get to have my own adopted moko on the crew.”

Originally from Mohaka, Jo (Ngāti Kahungunu, Ngati Pāhauwera) has moved around in the four decades since she left the region in 1978.

She and her “local boy” husband Harry went first to Wellington then later returned to Raupunga, building a family of three boys (one now deceased) and one adopted daughter.

“We'd come back to look after whanau but one day in 2004 I just woke up and said 'let's go to Australia'. There wasn't any particular reason, we just needed a change, so off we went.”

Between them, Jo and Harry had a range of jobs over the ditch, the most memorable being Jo's work on the 33-kilometre Sydney West connection road (WestConnex).

“It was one of the biggest roading projects in Australia so you had thousands of people working on it . . . the scale was huge,” she says.

“There were some pretty dangerous gum trees that had to come out so we got a bit of stick from the locals about that, but I also got to meet some amazing characters.”

In 2018 the couple returned to Aotearoa and, having lost their Raupunga house to a fire, resettled in Jo's home territory of Mohaka.

The next year she joined QRS as a labourer, soon knocking off her Class 2 drivers licence and qualifications in wheels, tracks and rollers and traffic control (STMS).

“I loved that first job with the Ministry of Works, especially working with a bunch of women I knew, so it's great to be with QRS, getting to work outside with some really cool people,” Jo says.