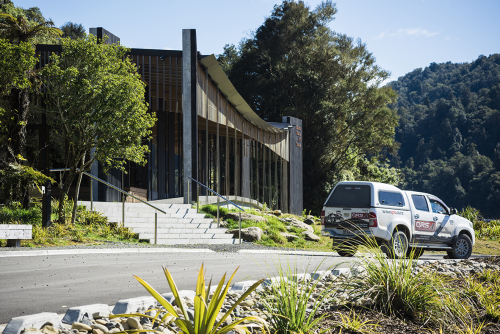 “It’s a beautiful award. It’s taken a long time and it’s an inspiration for our people to build our own houses in the same way using similar products and methods.”

Earlier this month the building designed by Tennent and Brown Architects and developed by Ngai Tuhoe was awarded the Ted McCoy Award for Education at the New Zealand Architecture awards.

For the past 23 years Muzz has worked for Quality Roading and Services, a company that played a very tiny role in the construction of the building.

The company was one of the first contractors onsite clearing the area and laying metal down so other contractors could come in. QRS also helped out with the building’s foundations, landscaping, the car park, and the turning circle.

Muzz is a QRS project manager and says the company is very proud to have been involved. During construction many lake-based Ngai Tuhoe-affiliated QRS staff were able to work on the project.

“It was an enormous privilege to be involved in a professional capacity with the spectacular Te Urewera Visitors Centre. Because we’re local we’re really invested in projects like that. Everyone is fully immersed in the aroha and respect that goes with them.”