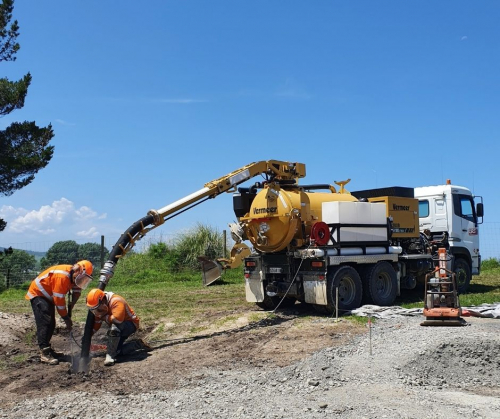 “These days we often need to dig in and around the region’s growing network of buried cables. Being able to use hydro-excavation to help locate them and safely excavate around them, is a game-changer.”

“Instead of manually removing soil, hydro-excavation uses a combination of high-pressure water to break up debris and soil on-site and a powerful vacuum to literally suck it away.” The soil is sucked into an onboard debris tank before it’s safely transferred elsewhere.

Mr Wilson says the hydrovac offers a range of benefits. Hydro-excavation is more accurate and sometimes faster than traditional digging. It also reduces the risk of potential damage to buried utilities and the surrounding area.

QRS contracted local company Wairoa Welding to attach the hydro-excavation unit to the deck of a repurposed QRS truck.

Last month QRS staff, Vaguna Taliauli and Trent Zeilstra, were trained by staff from construction equipment company AB Equipment in how to use the hydrovac. Since then, they’ve used it to dig a sewer line in and around fibre optic cables on Scott St; and install drainage sumps near the town playground where there’s underground power at the site.

Having our own hydro-excavation unit saves us from having to hire a unit from out of town, and it reduces the number of tracked machines we need at each worksite, says Mr Wilson. He added that the safety of the operators and anyone nearby is paramount. The boom is operated by remote control and if the machine detects there’s a problem the truck shuts off and stops functioning.

“It’s exciting for the company to be using new innovations. Other hydro-excavation applications include sucking debris out from cattle stops, tanks and manholes.”

Image caption: Vacuuming outdoors! Quality Roading and Services staff Vaguna Taliauli and Trent Zeilstra operate the company’s new hydro-excavator to locate underground pipes at the Wairoa wastewater treatment ponds. One-thousand litres of water is stored in tanks on the side of the truck and is pressurised and blasted into the ground to excavate material. An industrial-strength vacuum is then used to convey the material slurry to the larger onboard yellow tank. The excavated material is then carted and dumped at an approved site.