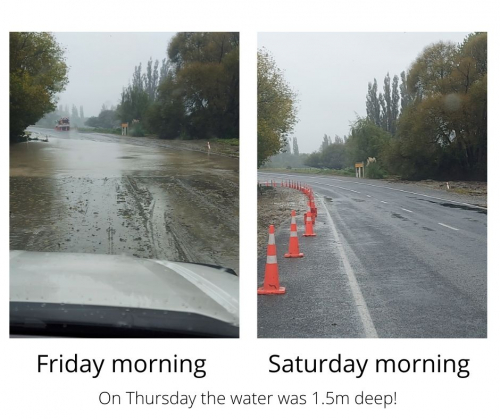 Quality Roading and Services emergency response staff have been described as hard-working heroes after they worked around the clock last weekend to keep Wairoa open and moving.

“We combined our divisions and had men and women working day and night to open up the roads,” says QRS operational manager Anthony O’Sullivan.

“This morning we’ve had to tell some of those hard-working heroes to take some time off,” Mr O’Sullivan added.

Rain had fallen on the district for a week before roads in and out of the district began to be closed on Wednesday night.

Traffic flow was severely impacted at Turiroa just south of Wairoa where the river breached the road, and on State Highway 38 at the pump station.

QRS crews worked through the night on both sides of the flooded areas in order to keep road users safe.

Mr O’Sullivan says night work is particularly challenging. “It’s dark, it’s windy. You have to be really engaged and active. You need to visit each member of the public that pulls up and explain what’s going on. You are dealing with so many elements. It’s such an important job.”

“We had terrible wind on Saturday night bringing trees down. The ground is soft and the trees are so heavy because Autumn hasn’t happened yet. They gather weight and just fall over.”

Mr O’Sullivan says the emergency response work continued on Monday as QRS staff and its contractors continued to open up roads including Putere and Ruapapa Roads.

“We have punched the roads through so people can get moving again.” Thousands of cubic metres of material has already been shifted so that logging trucks, food delivery freight, and members of the public can journey through the areas.

“Ahead of us lies a long clean up job and recovery back to normal.”