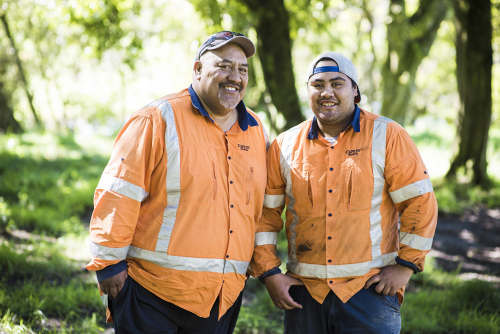 Malcolm (Muzz) Tuahine, Ngai Tuhoe, has plenty to keep him busy in the job he loves at QRS.

As project manager he spends his days moving between jobs, making sure everyone has what they need when they need it to meet company deadlines.

But unlike other project managers Muzz has a pastoral role with some of the younger Ngai Tuhoe workforce, and is often called upon to liaise between QRS, clients, and iwi.

“This work keeps me in touch with my people, my iwi, and helps keeps relations open with iwi authorities.”

“There are all sorts of reasons for doing things in certain ways and often the people of the land are the ones who know best.”

Muzz says the drive to help is also personal. “For me it’s about things like the continuing growth of the trees and the ferns, so it will all still be there for my grandchildren.”

He says information from local Maori has helped QRS develop its commitment to environmental policies, which in turn make it a better citizen of the region.

“For example, Maori lore says you shouldn't dump material from things like slips in the lake, and QRS follows that as a matter of common sense.”

A father of five, Malcolm has been with QRS since its creation in 1994. “As a young fulla I saw lots of my mates go on the dole but that wasn't for me,” he says. “I wanted to show my kids how to work, how to take responsibility for their lives, and that's what they've done as they have grown.”

Muzz has many whanau working alongside him at QRS including son Tahoka Tuahine, and brother Jason Tuahine.

He says in some ways, QRS is like family too.  “QRS have looked after me. My mum and dad died early and this was my only chance to get a job. There were 10 at the interview and the boss picked me.”

“I love working outside, working with other people, and listening to different whakaaro. It gets my mind thinking.”