Stormy weather and no two days the same 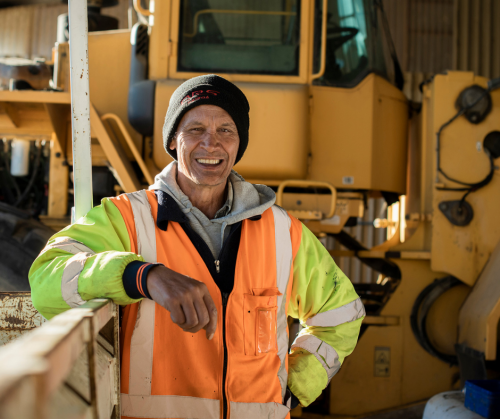 HARD-WORKING and always cheerful, Aaron Ruawai threw his heart and soul into helping open up Wairoa’s roads last weekend. After reluctantly taking a few days off we caught up with him to learn more about his love of whānau, Wairoa, and the work he does now.

Over the 13 years he and his whānau operated a Wairoa cafe and takeway, Aaron Ruawai says it was the people he loved -- both locals and visitors – but there is one he remembers more than most.

Film star Cliff Curtis was a Fish & Feathers regular and Aaron's nieces, in particular, were quick to serve the actor his standard order of steak, eggs, chips and salad.

“But we really enjoyed dealing with everyone,” he says, “until working seven days a week got to all of us and we decided to give it up to spend more time with our families.”

That was in 2017 and running the cafe was just one of many jobs Aaron, Ngati Kahungunu, had in the lead-up to his current position on Quality Roading and Services' capital construction team.

Gisborne born and Wairoa bred, Aaron's first job was working the fishing boats in Kaikoura, but when his father had health issues he came home to help out in the whānau's fencing business.

“I've never been afraid of hard work and my dad ended up living until he was 80 so it didn't do him any harm either,” he says.

In any case, Aaron had by then met his wife, Leander, and in their more than 40 years together the couple has made a family of five kids with their youngest, Jaxon, aged just 18.

To support the growing brood he worked as a butcher and supervisor, followed by a bit more fencing until the whānau took over Fish & Feathers in 2004.

Then in 2017 he went to Gisborne to work in horticulture, commuting home in the weekends.

“I was already missing the family but when Jaxon was diagnosed with cancer in 2019 I came home for good,” he says.

“It was pretty horrible . . . that year we spent a lot of time at Starship Children's Hospital. We never really believed we would lose him but it was a bad thing for him to go through. We are just so grateful he could be treated.”

By the time the whānau had returned home Aaron was determined to never again be away from his boy and by September 2020 he was with QRS.

Now aged in his 60s (though many of his workmates think he is in his 40s) the papa to 11 moko says he's always willing to learn and has already upskilled in Class 2 (heavy traffic) driving, and earned his wheels, tracks and rollers license.

“I like working outdoors and I love the fact that, in this job, no two days are the same and we have an awesome whānau-feel in our crew,” he says.

“This past weekend we manned closed roads and helped clear trees from roads. It wasn’t as bad as Bola but it’s not finished yet. Everyone helps each other out, people brought out food, managers brought coffee and checked we were alright. That’s what I mean about whanau-feel.”

Aaron says from here he hopes to become more competent across the machines he is using and then move towards qualifying with a Class 4 (heavy vehicle) driving ticket. “That's really something to aim for.”