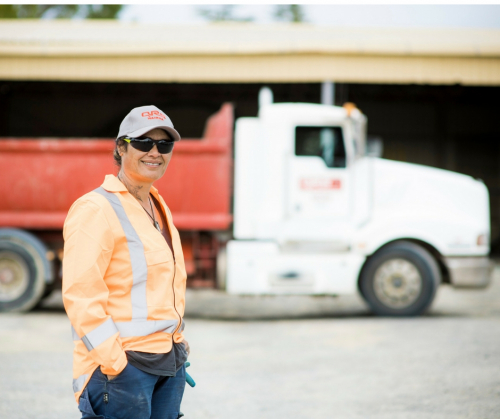 AFTER only three years at QRS, Shar Hawkins is a great example of paving a pathway for future female operators in the roading industry.

Shar, who is from Mohaka and is Ngati Pahauwera and Ngati Kahungunu, has just been handed the keys to a 6 wheel, 450hp, 18-speed Kenworth truck, as a result of earning her class 4 licence.

Shar carts slip material away from drainage and road blockages, and carries aggregate from different locations. She’s looking forward to learning the skill of spreading metal.

“I’ve reached one of my many goals” says Shar, who applied for a job at QRS after family members did the same.

“I love the machines and my ultimate goal was to operate the diggers and trucks. I’m grateful to be given the opportunity to do so.”

In three years, Shar has progressed from a labourer through to a traffic controller, and then to an excavator, Moxy, and loader operator.

Learning to operate all the different machines and a 6 wheel truck was made possible with all the positive assistance given from her managers and fellow operators.

“I believe if you’re willing to learn, they’ll be more than happy to share their knowledge and tell you stories of what they’ve experienced and learnt over the years. I’m really appreciative of that support”.

Shar and only one other female at QRS hold their class 4 licence, which is an achievement in itself.

Before starting at QRS, Shar had no knowledge about maintaining roads or operating machinery. Since then, Shar has grown an appreciation of the knowledge, hard work, skill, of each individual within the company.

“You don’t realise this until you’re in it, doing it, learning it. Everything is about safety, planning, prepping and teamwork. There is so much responsibility when it comes to maintaining the roads. As well as doing this safely, we are making them safe for road users.”

Shar’s boss, Malcolm Tuahine says QRS’s latest big rig operator has a great future ahead of her in the roading industry. “So far, no task has been too hard for Shar. Her thirst for learning and her positive attitude means she gives anything and everything a go.”