Papa presides over parks and reserves 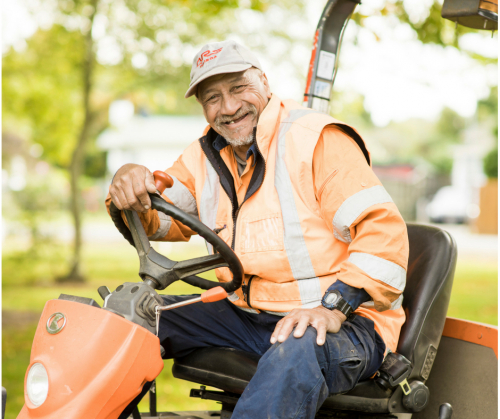 THEY don't call Phillip Tipu “Papa Phil” for nothing - after more than two decades of driving a lawnmower, he's the honorary grandfather of Wairoa's parks and reserves.

It's a huge job that sees him mow hundreds of kilometres a week but he's not on his own -  colleague Henry Turipa usually drives the big Ford tractor to cover the wide open spaces, while Phil opts for the precision and speed of the smaller Kubota used for trickier areas.

“One thing is for sure in this life,” he says, “you know the grass is not going to stop growing.”

Wairoa born and bred, Papa Phil (Ngati Kahungunu) has a long history of caring for the region's civic facilities, starting in the 1980’s by working for the district council.

“We did all sorts of work but the job I probably recall best is working in the rain sandbagging the town to protect from the flood waters caused by Cyclone Bola in 1988,” he says.

“Then we went over the other side of the river, where we watched the waters rise and then the bridge collapse. I'll never forget the sound of it banging and crashing as it snaked before it went down.”

In the early 1990s Phil worked as a sexton, caring for the grounds and digging graves at Wairoa's two cemeteries.

Then when QRS was formed in 1994, he came on board to use his groundkeeping skills on all parks and reserves.

Though he is approaching retirement age, the grandfather of more than 10 moko has no plans to step off his machines just yet.

“I've seen a lot of changes at QRS but it's still a local company with local people and I really enjoy that,” he says.

And he confesses that, in his down time, he's “a bit of a homebody”.

“I like to go home and mow the lawn.”