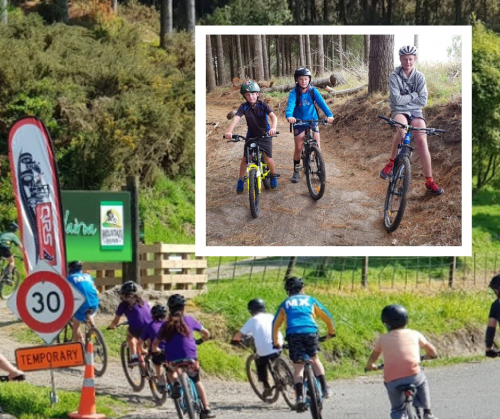 WITH weeks of bad weather behind them and their first big event looming, the guardians of Wairoa's new Mountain Bike Park called for help from one of their staunchest supporters . . . Quality Roading and Services.

“We had riders coming from all over the region for the Tairawhiti Secondary Schools Mountain Biking Competition, but with lots of storm damage the tracks seriously needed some attention,” says Adventure Wairoa president Russell McCracken.

“So we rang QRS to see if they could help out with some river metal and they were there in no time. They've already been right in behind the Bike Park so to get ongoing support is just amazing.”

Opened in April, the Wairoa Mountain Bike Park tests riders with grade two-to-four tracks across seven kilometres of trails, as well as offering a birds-eye view of launches from the nearby Rocket Lab complex.

“As well as getting stuck into the scrub-cutting they delivered metal and helped provide us with signs for the main entrance, which all had a massive impact on the formation of the Park and how it functions,” Mr McCracken says.

“What's even more important to us, though, is that this facility has had ongoing support from a totally local company like QRS. It is in itself a community asset, and now it has helped build another one.”

And while QRS chief executive Nigel Pollock was confident the Bike Park would be a great community facility, its success has gone beyond all expectations.

“Russell tells us that, even through these winter months, it has been attracting up to 500 people a week including local, New Zealand and international visitors,” he says.

“That's an incredible bonus for Wairoa and we couldn't be more pleased to be a part of it.”