Birth of a Bridge 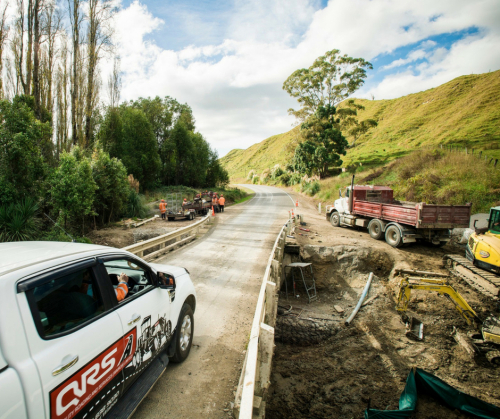 Waitahora Bridge is 2km up Tinoroto Rd from Frasertown. It was closed 9am Friday 11 May so work could begin on lifting the bridge deck and two outside beams from the bridge abutments.

A torrential downpour dogged the five-strong QRS day shift. Rain continued all through the night making it slow going for the 5-strong night shift who worked predominantly on reattaching a new timber deck.

Mr Wilson says just before the road was closed a woman in labour driven by family members was waved through.

“It was pretty full on. That situation, along with some challenging issues around fixtures and fittings and a rising river, certainly made for some dramatic moments!”

Mr Wilson says despite the teeming rain and tough working conditions the QRS staff never complained and instead threw themselves into finishing the bridge replacement ahead of schedule. “They got stuck in, stayed safe, and the mood was always great.”

QRS was pleased to learn later that a healthy baby girl was born in Hastings hospital a day after they closed the bridge.