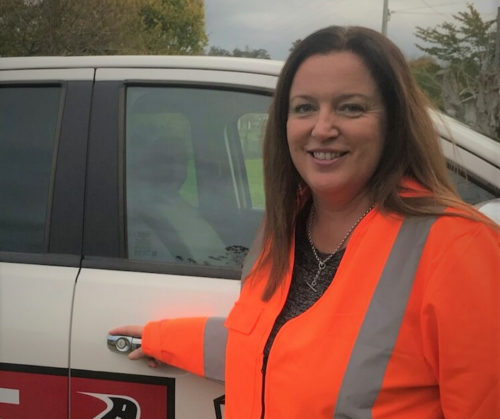 IF there is anything Michelle Hedley knows – it’s roading; and now she’s chosen to take the road that leads back to Wairoa!

Locally born and bred, Michelle spent the first 35 years of her career working for the Ministry of Works and later Downer NZ, first as a school leaver in administration, then working her way up to managing complex contracts and finances.

When Downer in 2018 moved its Wairoa office to Gisborne, Michelle went with it meaning she had to make the daily hour-long commute from her home in Frasertown.

But by early 2019 an opening at Quality Roading and Services meant she could continue to build her career, while getting to spend more time in Wairoa with husband Gareth and their two children.

And QRS chief executive Nigel Pollock could not be more pleased.

“Michelle came on board as routine maintenance manager which is a very vibrant role that will enable her to tap into the vast wealth of historic knowledge held by our team, while at the same time applying her existing skills across the operation,” he says.

“For us that's an ideal scenario, one where someone brings an existing skill-set, has access to our base of knowledge, and brings those together to make a role their own.”

Michelle has managed contracts for both sealed and unsealed roading around Wairoa and, while in Gisborne, held positions as customer stakeholder manager (meaning she has great people skills) and finance and performance manager (meaning she knows how to see the job gets done, on time and on budget).

However, she says her most memorable role was in 2010 when she was site administrator for a $16 million project to build a bridge to help make the journey between Wairoa shorter, less winding and safer.

“In terms of career development it was a bit of a sideways step but the Matahora Gorge project was one I really wanted to be involved in,” she says. “That gorge was a real shocker and to have been part of a project to make it better is something to be really proud of.”

Then, immediately after that, she was shoulder-tapped to manage a $4.5 million maintenance contract that covered over 300 kilometres of roading in the Mohaka/Waiau area.

“It seemed like a great opportunity but then two days into the contract there was a huge storm that caused massive flooding across the district,” she recalls.

“We had to pull in resources from all over the country and it basically tripled the workload of managing the contract. But we got there and having your skills tested like that is a real reminder of how important great planning – and having a great back-up plan – is in this industry.”

As part of her job Michelle Hedley routinely manages budgets valued at tens of millions of dollars, but says being back working in her hometown is priceless.

“When I thought back to the job I enjoyed the most I realised it was the Mohaka/Waiau contract, where there were lots of technical aspects to work on but I was able to engage with the people of the region on a daily basis,” she says.

“Being with QRS means I can get back to my happy place, while working with a great employer that is going through an incredibly exciting period of expansion.”