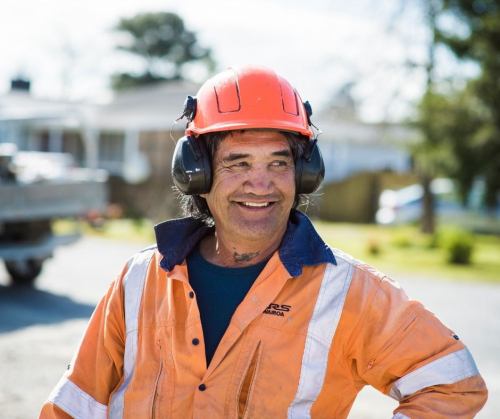 He knew they could fix it, he just didn't think they would fix it, so when the Wairoa-to-Napier rail line reopened Sam Jury was right on board.

These days, a supervisor with Quality Roading and Service's capital works division, Sam like many locals started his career at the meatworks. But, deciding he wanted to work outdoors, he in 2006 moved to a role maintaining the Gisborne-to-Napier rail line.

As a “ganger” for KiwiRail, Sam (66) ran a team of four that took care of maintenance along the entire stretch from Gisborne to Napier, the crew travelling via a hi-rail truck that could carry them along both highways and train tracks.

“It was pretty much like what I do with QRS, but with rail,” he says. “The track inspector would go out and identify any faults, then we'd go and fix them.”

The job came to an end when a series of catastrophic wash-outs saw the line mothballed in 2012, but left Sam with a swag of skills to transfer over to his new job with QRS.

And that, he thought, was the end of the (rail) line.

“It was a bit of a shame because, even though the line was being underused, things were starting to turn around,” he says. “At that time Leaderbrand was sending 20 tonnes of squash a week on the line and planned to double that, and there were moves to get logs on, too.”

Even before the closure Sam used to come across plenty of big wash-outs along the track (though they'd be mended by a heavy machinery crew) and while the ones that saw the line mothballed were massive, he always believed the line could be fixed.

“But though I thought it COULD be fixed, I didn't really think that it WOULD be,” he says. “I thought

I'd never get to ride that line again.”

But he did: When KiwiRail in June reopened the Wairoa-Napier stretch of line, Sam (Ngāti Kahungunu/Ngāti Porou) was on the list of invitees to take the first train ride back from Napier.

“I didn't really want to go, to me it was just another train, but my wife (Bev) thought it was important,” he says. “Because they were testing the track it was a bloody long trip, but now I agree with her. It was important.”

In fact, if a passenger train service was introduced on the line, Sam would be right back on board.

“Even today it is one of the safest ways to travel,” he says. “You can just sit back, relax, and totally enjoy the trip.”