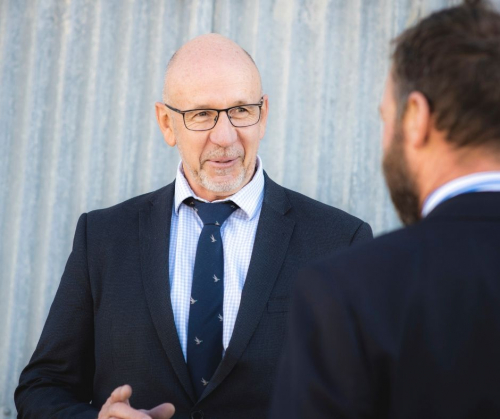 Quality Roading and Services newest director has worked on significant transport projects in every corner of New Zealand and his knowledge is invaluable, says board chair Guy Gaddum.

“With QRS now working for national organisations it’s smart to have the national perspective that David offers at board level. His background in helping deliver projects across roads and highways, railways, bridges and other transport infrastructure around the country is world class. We’re thrilled to welcome him aboard.”

He joined the QRS board of directors in June taking the number of people around the table to three. With the recent departure of directors Ian Redshaw and Wendie Harvey, a fourth director is expected to be appointed by Wairoa District Council before the end of the year.

David is based in Tauranga, but his advisory and project work takes him all over the country. Just recently he’s been in Dunedin with the Peninsula Road widening project; up north advising on the public-private partnership Puhoi to Wellsford road extension; and on the West Coast with a $25 million shared road/rail bridge replacement project.

Now he’s helping out QRS on the East Coast. He’s already very impressed with what he’s seen of the Wairoa-based civil contracting company.

“The level of competency I have come across and the staff’s commitment is exemplary. For example, I thought QRS had an amazing induction process…very comprehensive.”

“From initial observations of some of the current construction sites driving from Gisborne to Wairoa QRS needs to be commended on the pride taken by their staff in the work being undertaken at present.”

David, originally from South Africa, has had over 30 years in the roading and transport sector. He says the visibility of QRS, it’s obvious pride in its vehicles, and the attention to health and safety is to be commended.

“QRS has a very disciplined approach.  Its projects are not only stimulating growth and ensuring Wairoa is open for business, it’s also providing valuable development and employment opportunities for locals.”

David has previously worked with QRS chief executive Nigel Pollock when Mr Pollock worked for Downer in Gisborne and David was a Tairawhiti Roads Maintenance Contract board member.

Nigel says he’s leaned on David for support around leadership, and strategic and analytical thinking, and is excited to have him on the board.

“With David joining the team we have another person passionate about the company’s vision coupled with sage advice from an experienced industry leader.”