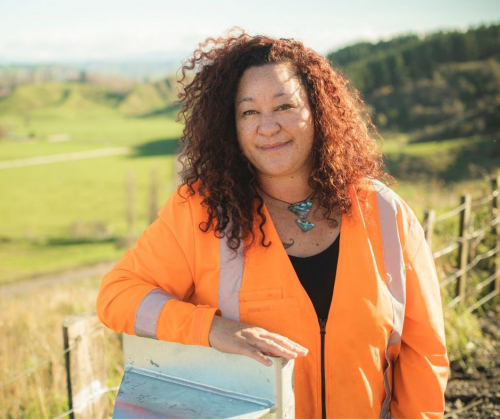 “We don’t want to dig down and disrupt gas, power, and fibre cables when we’re constructing guardrails,” says the curly-haired bubbly health, safety and quality assurance officer who reckons her job is “cool bananas.”

Davena has been with Quality Roading and Services for six months as part of the Safety Boost Programme making regional state highways safer through a range of low-cost safety improvements.

The job is familiar to Davena who before this worked on the ultra-fast broadband roll out to rural areas between Tolaga Bay, Matawai, Gisborne and Wairoa.

She loves the role which gets her outside alongside skilled contractors and road men and women who are as passionate about road safety as she is.

“I didn’t know much about roading when I came here but the guys I have been working with have been respectful and brilliant to work with.”

Davena has moved back to her home town of Mahanga to be closer to her parents and her extended Bell whanau. In the weekends she loves nothing more than spending time on the white sandy beaches of Mahia and Mahanga and collecting kai moana.

Known by her QRS colleagues for her effervescent personality and cheerful disposition Davena couldn’t be happier.

“I am very grateful to be working at QRS. I love it.”