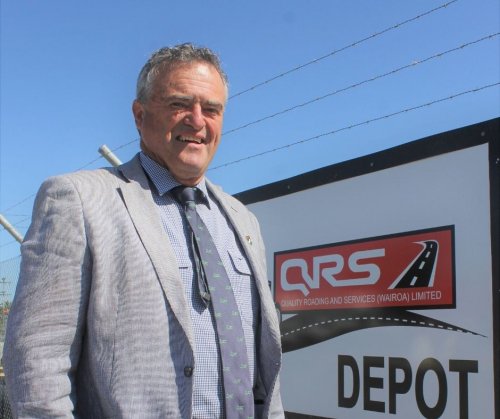 Although he was born in Waipukurau, new Quality Roading and Services board member Fenton Wilson grew up on the inter-generational Frasertown farm he now runs and says Wairoa is in his bones.

“It gets to the point where you want to do everything you can for the district, to see it thrive,” he says. “To have a governance position in such an important organisation in my own region is a real privilege.”

Not that governance is new to the 54-year-old father-of-three: in the past decade he has held roles from being a Hawke's Bay Regional Councillor to working with organisations like OSPRI (bovine TB prevention), Hawke's Bay Tourism, Predator Free NZ and Centralines.

“A benefit to being self-employed is that when you see a need, you can make things work so you can act on it,” he says.

“I think you get to the point in life when you realise you have more to offer in a broader way and that is why I am interested in governance.”

Being Wairoa to the bone, when Fenton heard QRS was hoping to add another member to its four-person board, he jumped at the opportunity.

He acknowledges that he joins at a time when QRS has already shown a massive turnaround – getting out of the red and well into the black, securing contracts worth tens of millions of dollars, and keeping around 100 staffers in full-time work.

And he's looking forward to being part of the next stage in the company's development.

“We already know QRS is doing wonderful work but, as it is the second-largest employer in Wairoa – the largest employer of full-time permanent staff – it's time to really invest in those people,” he says.

“There are things that could be done to help them do even better work with even greater efficiency and that is something I would like to see evolve. We are always keen to see people invest in our community, but we need to show that we are prepared to invest in ourselves.”

For his part, QRS chief executive Nigel Pollock says having Fenton on deck gives the board continued balance and diversity with local representation and an ear to the ground.

“The QRS board is pragmatic and provides strong governance support to the management team and shareholders,” he says. “Fenton's appointment is a welcome addition.”

And Fenton is looking forward to “walking the talk” in supporting QRS in its own intent of providing quality work with integrity and honesty.

“QRS is a great vehicle to remind Wairoa of just how great we are,” he says. “Every day the team members are doing things that they might not be recognised for, but that are absolutely critical to our district.”