Engineer road-ready and raring to go! 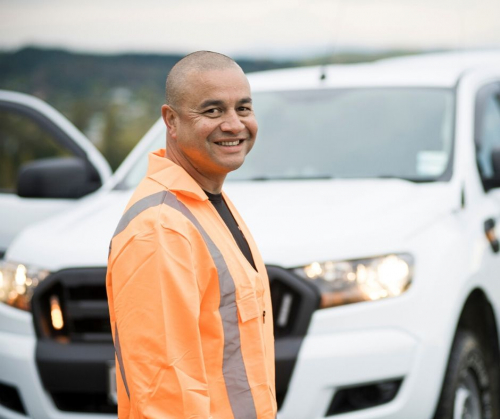 BY the fourth week of lockdown Quintin Baty had spent lots of quality time with his wife and teenage son, done more jobs around the house than he ever thought possible, and made so many trips in caring for his health-compromised parents he'd lost count!

“Our main task has been keeping our parents well so that's what we've been focused on, doing our very best for them,” he says.

As asset engineer at Quality Roading and Services Mr Baty is itching to get back on the job full-time.

Mr Baty says as soon as New Zealand learned it would be going into lockdown QRS management did all it could to make the company's 90-strong workforce feel safe.

They held a pre-lockdown meeting; chief executive Nigel Pollock tried to call each and every worker; they all received the wage subsidy (topped up by QRS to 80 percent of their wages); team leaders kept in contact with vulnerable staff; and workers were assured that once lockdown was lifted there was lots for them to get stuck into.

“I have certainly been grateful to the company for supporting our staff in these strange circumstances, and I know the workers themselves are very grateful, too.”

At his own semi-rural home just out of Wairoa, Nigel Pollock and his teacher wife Clair divided their time between work and keeping their two sons happy and occupied.

“There was lots of outside time, lots of Lego and board games, but also this constant mindfulness that we had another whanau to look after over at QRS.”

Meanwhile, closer to town, QRS people and capability manager Jeremy Harker's days were similar but, with older boys, his big challenge was in keeping them out of the surf.

He also had his hands full with work commitments. He says his job was made easier by the combination of having a well thought out existing crisis plan, good notice for the alert levels and clear direction from the government.

“What was key for us was reducing uncertainty for everyone at QRS telling them what lockdown meant for the business and what it meant for them,” Mr Harker says.

Back at the Baty household on the eve of moving into a level 3 lockdown Mr Baty says chatting with other staff has revealed some positive outcomes from the lockdown. There’s been time to reflect on their lives and meaningfully reconnect with whanau.

His personal regret was that he was unable to go to Australia to visit his daughter who, on April 6, delivered her first child . . . Quintin's third moko.

“We were due to fly out on Anzac Day but it's all good. We know she is well. We are just loving from a distance.”