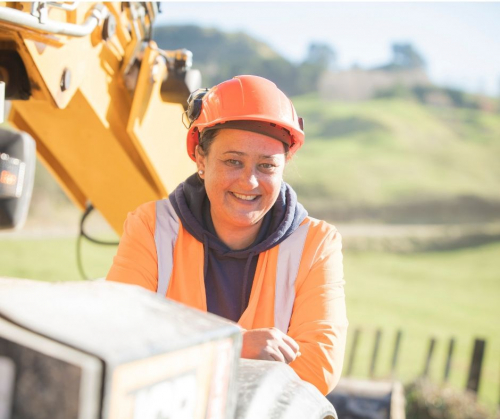 ISA Robertson is well familiar with big machinery – after leaving Wairoa for the “bright city lights” of Sydney, she worked for a time as a forklift driver – so joining Quality Roading and Services made her feel right at home.

That was towards the end of 2018, by which time Isa (39) had already been back in Wairoa for a number years, having returned to raise her children.

And bringing them “home” was the right call, she says.

Referring to her oldest son who was the 2019 head boy at Wairoa College Isa says “being here has offered him lots of opportunities and really given him a sense of place. I'm very, very proud of him.”

Meanwhile, as well as parenting her oldest boy and his younger siblings Isa, Ngāti Kahungunu spent time on her career, working her way up to the role of meat inspector at the local meat works.

“But I missed being outdoors,” she says, “and I really wanted to get back on those big machines.”

Just six months into her employment Isa had trained in health, safety and traffic control and soon after gained her wheels, tracks and rollers ticket, as well as the class 4 licence required to drive heavy rigid vehicles.

Next on her list was getting the Class 5 heavy combination vehicle licence she'd need to reach her ultimate goal . . . driving big six-wheelers.

“It's been amazing having the chance to lock down all that extra training and to get to know all the different QRS crews,” she says. “It makes you feel that every day on the road is a good day.”

Isa Robertson says her attitude to work is just what she tells her son, along with the younger crew members on team QRS.

“It's not who or where you are that matters, it is how you recognise when an opportunity is available and then go and make the best of it.”