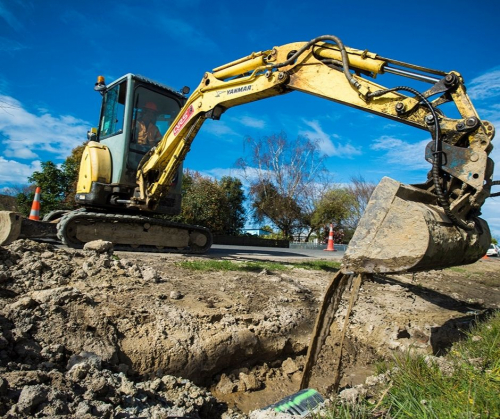 “The recent profit growth experienced has been driven by diversification of our company’s customer base. It meant we navigated the onset of Covid-19 with a strong balance sheet. In March 2020 there was no panic at QRS.”

Mr Gaddum says three years ago, two-thirds of QRS’s work was from WDC. By 2019 that had dropped to a third as QRS began contracting for a mix of private and Government work.

“That meant at the onset of lockdown we could respond with assurance and calm in the face of an emergency. Within a few days each staff member received a personal phone call from the chief executive letting them know they’d be paid the wage subsidy and that it would be topped up to 80 percent of their usual income.”

Profit for the past financial year had been affected by an impairment to the asset book value of Tangihanga Quarry, added Mr Gaddum. Am impairment test identified ongoing concerns such as low market demand, an inability to meet market pricing, environmental factors, and production restrictions, so QRS impaired the asset in full with a book write down of its investment by $358,446.

The agreed shareholder distribution to WDC was $250,000.

QRS chief executive Nigel Pollock says he’s proud that in 2020 QRS continues to strike a good balance between its economic support for WDC and it social responsibilities. “We enjoy a strong and mutually beneficial relationship with WDC as evidenced by the Mahia East Coast Rd collaborative contract and WDC’s endorsement of Provincial Growth Fund monies for our operations hub.”

The bold vision and sound business case for the operations hub was supported by WDC which meant the project attracted a $2 million low interest loan from the Government’s Provincial Growth Fund.

Mr Pollock says QRS invested $7 million in salaries and wages last year and contributed $43,600 worth of sponsorship and support in kind to local events, sporting groups, schools and marae. The company increased its $200,000 annual training spend to $450,000, and this year a record 22 staff are in apprenticeships.

Another highlight is the strengthened culture around zero harm in the workplace. “Despite an increase in turnover and QRS’s growing work complexity and geographic reach, staff injury and incident rates are trending down.”