A little bit of effort goes a long way 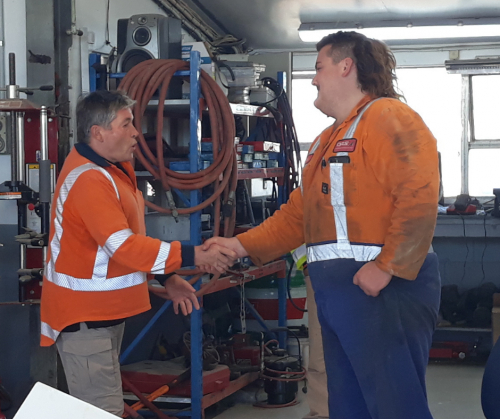 At 23 Alex Little has become the youngest qualified diesel mechanic in Quality Roading and Services’s workshop.

“He’s a bona fide tradesman and there’s so much value in that,” says Alex’s proud manager Rob Mayhead.

It took Alex four years to complete his qualifications through MITO industry training organisation. Alex admits he could have done it faster if he’d been dedicated.

“At the start, I had better things to do on the weekends and I kept putting it off!” Unlike being at school, where there was someone to guide him, he says he had to find his own get-up-and-go. A valued prop with Wairoa Athletic, Alex reckons he would often choose celebrations over study!

“Karen was instrumental and supplied a lot of motivation at the start of the apprenticeship. Rob has been a big help, always pushing, and available to answer any questions.”

Alex says “once I knuckled down it was actually quite easy.”

He became strategic in how he studied, staying behind after work to collate his workplace experience. He made sure to attend MITO’s Wairoa workshops with other mechanics. “It was good to see those guys. There were apprentice mechanical engineers, motorbike mechanics, light automotive guys, and we would get in there and just smash out some work.” Block courses in Napier and Gisborne also kept him interested.

Alex, who is second youngest in the workshop, brings the number of QRS fully qualified diesel mechanics to four.

The workshop is the nerve centre of QRS and is always busy. Staff fix anything from chainsaws and weed trimmers to 25-tonne excavators, front-end loaders, and class 4 and 5 truck and trailer units.

Rob says he’s watched Alex grow from a young inexperienced student of machines into a respected mentor. “Once he got close to completing his trade he started to better understand its value. More challenging work. More respect. More pay. One thing I’ve noticed these past 12 months is his desire to help out and impart knowledge to others.”

Alex is continuing to study. He’s working towards level 5 auto-electrician qualifications as well as credits in management. In time he’ll be able to run a workshop. Colleague Lance Maxwell recently did the same courses.

Heavy diesel and automotive engineering are fantastic career pathways,” says Rob. “We’re riding the wave of tech innovation so these days a mechanic’s first tool is often a scan tool not a wrench.”

He says more workshop apprenticeship positions may become available at QRS next year “so I would encourage anyone interested to keep an eye out.” Alex couldn’t agree more. “There’s a good group of guys here, it’s a good company, I reckon just do it.”