Jacob Paku rises to the challenge 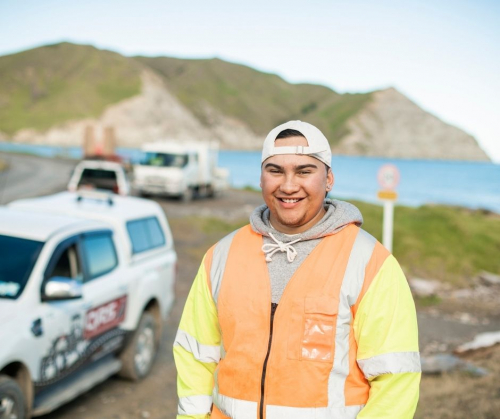 In one week, Jacob Paku was promoted, turned 20, became a father for the second time, and went into a Level 4 lockdown.

A man of few words, he admits “it was certainly a week to remember!”

Jacob Paku, Ngāti Kahungunu, is a former head boy of Wairoa College and has been at Quality Roading and Services since March. Quickly impressing senior staff with his wide experience in civil traffic management he was last month promoted to the job of training and competency officer.

Jacob says he was always keen to move into that kind of role. “I find working in staff training a satisfying role. I feel like I am helping people out.”

Jacob’s background is in traffic management. He came to QRS from the nationwide company Traffic Management NZ equipped with qualifications in traffic control, management, and supervising. Mr Paku’s qualifications are for all types of roading - from expressways to single-lane back roads.

His first QRS manager, Michelle Hedley, says the skills Mr Paku brought with him are invaluable. “He has had an impact helping us audit temporary traffic control sites and keep on top of paperwork. I’m pleased to see him move into this new role within the leadership team.”

Jacob will work closely with health and safety manager Paul Eaglesome and people and capabilities manager Peter Wairau. Both will help Mr Paku develop and grow into his role.

An area of work Mr Paku will be involved in this year is helping QRS meet the new Waka Kotahi NZ Transport Agency requirements for the safe and efficient management and operation of temporary traffic management sites.

“I congratulate him on his new role and know that he will learn a lot under the guidance of Peter and Paul.”

Image caption: New QRS training and competency officer Jacob Paku is thrilled to be working alongside senior staffers Paul Eaglesome and Peter Wairau. “I’m humbled as they bring so much experience to the area of health and safety, and training.” Image credit: Brennan Thomas, Strike Photography.