From police stations to playgrounds 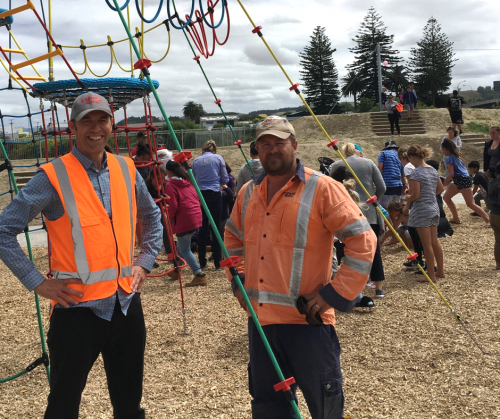 “I love the Wairoa district and my job. I’m proud to be born here. It’s such a beautiful part of the country, and yeah, I’m definitely excited about the playground because I have three kids of my own and the little two love it!”

QRS was the first contractor onsite for the town’s new destination playground which has been created in the area between the Community Centre and the bridge.

As the interest of the public grew QRS staff stripped top soil, carted hard fill material, and created the slope for the flying fox.

Mindful of the summer influx of tourists the QRS team worked hard to create the concrete paths and sandpit area while the playground grew up around them in time for the grand opening on 21 December 2017.

Mike Wilson joined QRS in 2013. As a 15-year-old he left Wairoa and pursued a career around the world as a carpenter, a foreman, and as a Corporal in the New Zealand Army.

He’s experienced numerous cultures and work site challenges. He’s built police stations and a power generation plant in the Solomon Islands, an industrial park in Niue, and army barracks in Linton, New Zealand. When he saw the job of project manager advertised at QRS, it fitted in with plans to come home.

“Everyone I talked to said QRS was a great company to work for, and dad did too, so I applied,” remembers Mike.

Mike says he and his family are now living the dream on a lifestyle block just out of Wairoa alongside two cows and a few sheep. “Just look what we have around us here in Wairoa, and it doesn’t even cost a lot to be here. We’re pretty lucky.”