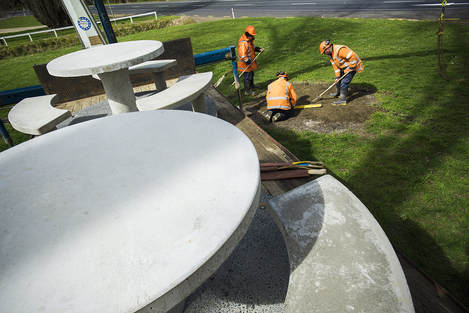 Not long after Nigel Pollock started as the boss of Quality Roading and Services, the QRS office took a charged up call from a member of the public.

Grading work done at the far end of Cricklewood Road had caught the caller’s eye and she was quick to phone in.

The new chief executive smiles when he recalls what happened next.

“The caller told us that the grader had come up the very same day she’d rung in and asked for assistance. She said the road was impassable but now it had never looked so good. She wanted us to pass on a chocolate fish to the grader driver who was responsible for the exemplary job.”

Nigel says later that week, at a regular health and safety briefing, QRS supervisor and grader driver Rob Ruru received the sugary seafood gift!
It’s unexpected phone calls like that, that exemplify what QRS stands for and the value it adds to the community.

“QRS and its staff are an integral part of Wairoa and the wider district. We’ve got men and women on board who as well as being good at their jobs coach sports teams, lead church groups, and advocate for their iwi.”

He says he’s thrilled to be part of the team and head up a company that’s enormously involved in keeping the township open for business, and supporting community services and events.

QRS is fully owned by Wairoa District Council and is responsible for maintenance of the unsealed road network. It also manages a number of local quarries, the recycling centre and landfill, and takes on multiple civil construction projects.

In his first four weeks Nigel has met nearly all the QRS staff and learned more about the financial systems and processes used by the company. He’s also met with stakeholders, customers, members of the public, and potential clients.

“I really needed to know how this place ticked, find out what’s working well and not well, and, at the same time, not stuff anything up in the first few days!”

“I’m really excited about the calibre of people I have met at QRS,” adds Nigel.

“We’ve got clearer objectives about what both organisations are trying to achieve, and at QRS we’re looking forward to further aligning our business around the expectations of council.

Big or small jobs, Mr Pollock says the company is invested in helping provide great infrastructure for the community.

Just last week Mr Pollock travelled to Napier. As well as being able to get through the slip prone road after heavy weekend rain thanks to QRS staff, he says he noticed a small difference QRS had made to a rest area south of Wairoa.

Three new picnic tables purchased by the New Zealand Transport Agency and made by Permacrete in Gisborne had been lifted into place by QRS.

“We continue to quietly help drive this community by keeping roads open during storms, but it’s the little things, like lifting heavy picnic tables into place, that count too”.

As it turns out, Nigel wasn’t the only one who thought that. QRS staff involved in the picnic table lift received a morning tea shout from staff at nearby Cafe 287.
​
Cafe 287’s Kathy-Jean Horua-Edwards says the shout was a no-brainer. “We were really pleased to be able to do something for the workers. They do a lot for Wairoa and we always see them out and about. They are a big part of our community.”