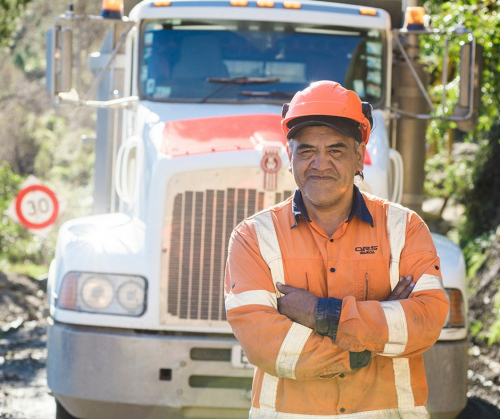 NEWLY introduced regular driver assessments at QRS have been met with universal endorsement.

The driver assessments were introduced this year for all QRS staff operating machines regardless of the length of time they’ve worked with the company, says chief executive Nigel Pollock.

“It’s not enough for us to simply train someone, have them sit their licence, and leave them to it. We want to show we have committed staff with the right capabilities and attitude on the right equipment, all the time.”

Mr Pollock says there’s a requirement under the Health and Safety at Work Act that all staff are trained and deemed competent in any activity before starting it, and regular driver assessments are one way QRS is meeting that requirement.

“QRS are doing a lot of things to ensure that whenever someone is in a machine that they, and the people around them, are safe. QRS is ahead of the game in that respect.”

QRS quarry staff and truck drivers were the first to be assessed including truck driver Jason Tuahine. Mr Tuahine spends a good portion of his day carting material away from sites where slips have blocked, or are still blocking, the road.

He carts asphalt, heavy machinery, aggregates and other materials across large distances, sometimes making 10 round trips a day to the stockpile site.  “But I love it,” says the dedicated staffer who’s been with the company for 12 years.

Mr Tuahine welcomed the assessment with Mr McInnes. “I just looked at it as a refresher course. It helped me re-focus on the basics and John also introduced a few new concepts or two.”

Mr McInnes says an unexpected police commercial vehicle check during Mr Tuahine’s on-road assessment made for a unique experience. The pair were carting metal along Kiwi Road when they were pulled over by the New Zealand Police accompanied by a New Zealand Transport Agency staffer.

“Jason was pulled over as part of a normal police check. It was great that we were doing the assessment at the time. Jason conducted himself spot on and we were within our weight limits.”

QRS continues with its competency-to-operate assessments and this month is focussing on staff who drive large machinery such as diggers and graders.