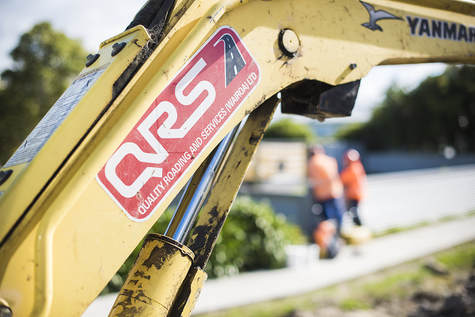 Revenue at Quality Roading and Services was up by $1.3 million to $13.3 million and nearly half of that poured back into the community in wages, the company’s latest accounts reveal.

“Turning this growth into profit is the key focus for next year. I’m looking forward to helping grow this company as we better position ourselves to take advantage of our rich body of local experience and employment of local people.”

Mr Pollock says QRS poured nearly $6 million of wages into the homes of Wairoa families last year cementing the company as a vital element for keeping the Wairoa district alive and thriving.

“That’s food on the table for families and whanau. We’re proud to be a local company employing local men and women. That’s the key to building a strong and resilient local economy, and as a result we’ll continue to invest in our staff by offering them opportunities to grow and learn.”

There were a number of drivers that lead to the after-tax loss of $152,000, says Mr Pollock. A quarry audit that reduced the value of QRS’ in-stock aggregate by $260,000 was a one-off situation that impacted the bottom line.

An unprecedented amount of heavy vehicles on the network has also put extreme pressure on the company’s profits.

“There’s no getting away from the fact that we’re delivering road maintenance services at a challenging time. As an organisation our staff go the extra mile and it’s that sort of dedication, to keeping Wairoa moving, that’s what we’re proud of,” says Mr Pollock.

With a proposed new structure in place QRS can give its customers a better service and be more financially prudent, says Mr Pollock. “And we project we’ll be able to pay our shareholder a dividend.”

An interim dividend of $50,000 was paid to WDC at the six-month result, but there was no dividend at the end of the financial year. The dividend paid last year was $140,000.

The annual report shows $38,174 was given away as QRS sponsorship of local events, organisations and charities. A sizeable amount went to The Gaiety Cinema and Theatre.

​Mr Pollock pointed out the sponsorship figure doesn’t include thousands of dollars of charitable services in kind provided by QRS including ground preparation and maintenance ahead of some of the region’s most loved community events.