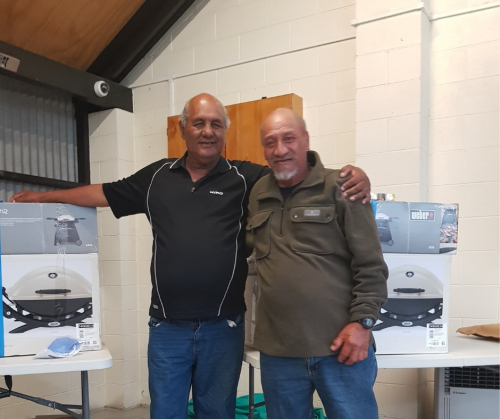 DON'T be fooled by the air of calm that surrounds Quality Roading and Services staffers Nick Murray and Phillip Tipu . . . in their decades on the job, they've seen a bit of drama!

In December the pair, both of Ngati Kahungunu descent, marked 30 years with the company.

The first part of it was with parent body, Wairoa District Council, which brought them in to help out after the devastation of 1988's Cyclone Bola.

Phil well remembers its impact.“We did all sorts of work but the job I probably recall best is working in the rain sandbagging the town to protect from the flood waters caused by Bola” he says.

“Then we went over the other side of the river, where we watched the waters rise and then the bridge collapse. I'll never forget the sound of it banging and crashing as it snaked before it went down.”

In the early 1990s Nick and Phil worked as sextons, caring for the grounds and digging graves at Wairoa's two cemeteries.

Nick recalls one time when the job didn't go to plan.

“We did all the digging by hand – it would take the two of us three days to dig one grave – and on this occasion it had been raining so hard and for so long the ground was like mud,” he says.

“Boom, the side of the grave crumbled and I fell in, crashing through the lid of the family coffin that had already been buried there. But when I called for help, my mate had made a run for it. He reckons he'd never moved so fast in his life!”

Weather-related incidents aside, the pair proved themselves to be hard grafters so when QRS was formed in 1994, the two workers stayed on – Phil using his ground keeping skills on the region's parks and reserves, while Nick joined the roading division.

In the ensuing decades they have done hundreds of thousands of kilometres on the roads and reserves, and have done the distance as family men, too.

Now Nick Murray and Phil Tipu are of retirement age – Nick joined Club 65 in mid-2018 and Phil joined him in the New Year – though neither has decided whether they will take time to kick back.

When the time comes, Nick plans to hop in his campervan and take an extended trip around the South Island.

And though Phil's role will change in early 2018 as his employer surrenders the lawn mowing contract, road maintenance manager Tony O'Sullivan says there will always be a place for him at QRS.

“Both of these guys have had, and still have, so much to offer,” Tony says.

“As well as being incredibly hard workers their historical knowledge is astonishing, and that's something we all value.”