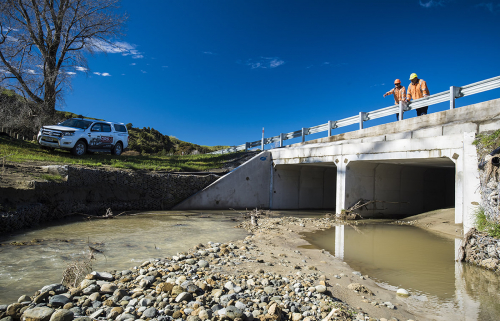 In 2017 QRS was contracted by the New Zealand Transport Agency to replace the single-lane Mangahohi Bridge, and remove the existing bailey bridge structure over it as part of a road upgrade project.

The project on State Highway 38 wasn’t without its engineering and structural challenges, some cropping up mid-build, as well as a lot of work in and around water.

During the project the Bailey Bridge and steel and wood structures left over from its predecessor were removed by QRS. Work was completed in two stages with a 23-week break in the middle to avoid any disturbance to the spawning fish.

The dedication of the 10 QRS staff that worked on the project, and teamwork with associated suppliers and contractors, meant the job was well done. Traffic was only ever held up for two-and-a-half hours.

The route is safer and faster now. People don’t have to give way and there’s an increased load limit for road users. There’s more visibility now that the blind brow has been removed.