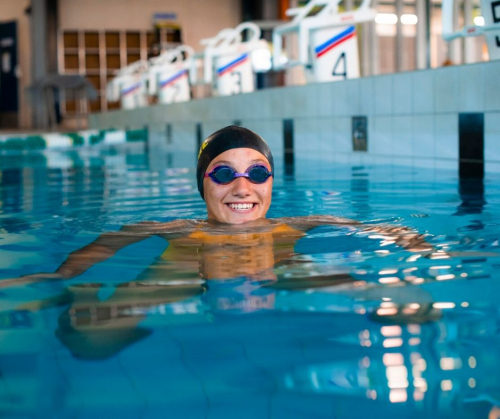 It’s 4.30am when dedicated teenage athlete Kaylah Reynolds hears her mother’s knock on her bedroom door. Bleary eyed but eager Kaylah rises to eat peanut buttered toast then heads back to bed for another hour.  By 6am she’s carving up lengths in Wairoa’s Community Centre pool under the watchful eye of coach Sara Bird. Kaylah is preparing for this year’s New Zealand Division Two Championships and Quality Roading and Services is doing all it can to help her succeed.

Thirteen-year-old Wairoa swimmer Kaylah Reynolds faces a lifetime of getting up early as she strives for two goals: to represent New Zealand in swimming; and one day become a baker.

“I haven’t really said that out loud before!” says the normally quietly spoken Kaylah, who in May will take to the starting blocks at Dunedin’s famous Moana Pool for a five-day competition attracting New Zealand’s best age-group swimmers.

Kaylah attends Wairoa College and as well as a handy netball and rugby player she’s been an avid swimmer for years.

When she was young, she spent Sundays at Wairoa Community Centre pool with mum Joanne and sister Tiana playing ferocious made-up water games that created a competitive spirit.

Kaylah (Ngāti Kahungunu and Whakatohea) will swim in five races at the New Zealand champs after qualifying with super quick times at recent swim meets.

At 1m 69cm Kaylah is lightning-fast at freestyle and breaststroke and by going to the division two champs she can set a course for older age-group national events and maybe, one day, a podium start wearing a silver fern.

Kaylah says she values Sara’s input enormously. “Sara’s a straight shooter! My coach, her dad Mike, and my mum are the three people who’ve helped me the most,” adds the grateful teenager.

Sara and mum Joanne say Kaylah is one of the most dedicated young athletes they’ve ever met.

“I know I’m her mother, but I have never come across another kid like her!” confesses Joanne. “She’s so determined and has a lot of willpower.”

Sara says Kaylah is a deep thinker and will always talk to her about how a drill feels. “Catching the water, cues, recovery, it doesn’t matter what we’re discussing Kaylah has a hardness, a spark, and you can see it in her eyes when you talk to her.”

Kaylah’s excited too! It’s why she doesn’t baulk at eating hot-buttered toast when most people are asleep.

“I don’t mind it. I like the fact that swimming is an individual sport. You have only yourself to worry about and count on. That’s good for me.”

As well as pool and gym training in Wairoa five days a week, Kaylah must also travel to Gisborne for swim club nights and age-group events. While in Dunedin Kaylah will swim under the banner of a Gisborne club as Wairoa Swim Club isn’t affiliated to Swimming New Zealand.

“It’s not easy,” says Joanne, who along with partner Arnold Smith is helping Kaylah reach her goal while working full-time and bringing up Kaylah’s two sisters.

“There’s training, and travel, and her swim gear, and all the time it takes. But we make it work and it’s worth it. Wairoa Swim Club are amazingly generous with their volunteer coaching. And we’re really appreciative of Quality Roading and Services for the financial support they’ve given Kaylah this year.”

Quality Roading and Services (QRS) chief executive Nigel Pollock says he understands the challenges facing young athletes from Wairoa. He says Kaylah epitomises the kind of person the company wants to have a sponsorship relationship with.

“Kaylah can swim up to 5km a session. That’s more than what most people walk in a day! But what sets Kaylah apart is her strong focus on a goal and the people she is surrounding herself with.”

Nigel and the QRS team wish Kaylah all the best in the lead up to the national event.