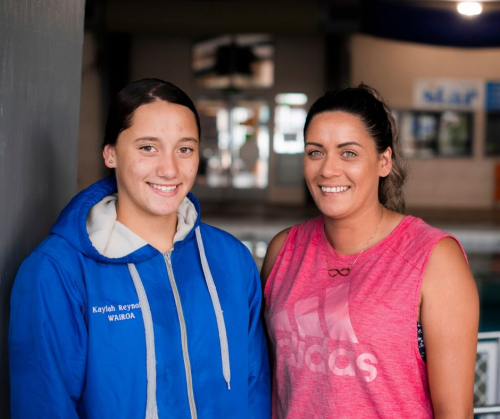 MAY 4 was set to be a big day for Wairoa's Reynolds-Smith whanau. Thirteen-year-old Kaylah Reynolds and mum Joanne Reynolds were heading south for Kaylah's first big Swimming New Zealand competition, while stepdad Arnold Smith was to be on his last day of the annual duck shooting opening weekend. No one went anywhere.

“I have to admit that when I heard the Swimming NZ Division Two Championships were cancelled I had a private wee tantrum at work before going home to tell Kaylah the bad news,” Joanne says.

“But with New Zealand at Alert Level 2, and the national age group champs already cancelled, we had a feeling that it was going to to that way so there was no point in getting upset about something we couldn't change.”

With the backing of a Quality Roading and Services (QRS) sponsorship, Kaylah's outing at the Division Two champs in Dunedin was to be her last chance to swim at that level before moving into the more testing Age Group events.

“She had really focussed on building up for it because we saw it as good practise before moving into age groups, so she'll literally be jumping in the deep end,” says Joanne, herself a regional rep swimmer in her Wairoa College days.

“We just have to work with what we've got. If the New Zealand Secondary School champs go ahead in August she'll have another chance to qualify for the Age Groups, then there's the NZ Short Course champs in October and, in surf lifesaving, the NZ Pool Rescue champs at about the same time.”

As a knife technician/storeperson at AFFCO Holdings, Joanne worked throughout the Level 4 lockdown prompted by the Covid-19 pandemic, while Arnold stayed at home with Kaylah and her two siblings.

Before getting stuck in, though, Joanne helped Kaylah devise a training system of cycling, running and working-out that, while maintaining her fitness, kept her safe and – most important under lockdown rules – close to home.

“The pool was closed so my coach (Sara Bird) drove by and chucked some papers with exercises on them out her car window and that was really helpful,” Kaylah says. “But on my first bike ride up a big hill my pedal came off, so I had to ride all the way home without it!”

For a teenager used to training at the Wairoa Community Centre pool both before and after school, being out of the water had been tough.

“I was really only getting wet in the shower!” she says. “Though one time during lockdown I did get to have one go in a tiny pool where mum tied a rope around my waist and I swam against that. But it felt weird.”

By Alert Level 3 of the pandemic response it was believed public pools could reopen at Level 2 and, for Kaylah (Ngati Kahungunu/Whakatohea), that couldn't come soon enough.

“I felt like I still had a lot of my fitness but it was going to be strange getting in the pool again. I just hoped they would hurry up and open it!”

Whatever happened, Joanne was confident her daughter would rise to the challenge.

“Swimming is tough in that it has slim qualifying times for national events but Kaylah did it the first year she started training at the age of 10. She does have natural talent, but she also puts in the effort and commitment so as long as it still makes her happy, we will support her.”

Especially strong in freestyle and breaststroke, Kaylah admits she can be her own worst critic but then, she's aiming high.

“My dream is to travel the world as an athlete, and maybe one day go for the Olympic Games,” she says. “Swimming just makes me happy and gives me a real sense of achievement, and that keeps me going.”

QRS chief executive Nigel Pollock says that, in its aim of supporting Wairoa youth with the drive to go above and beyond, Kaylah is just the kind of person the company wants to get behind.

“Her chance was taken from her this time but we had sponsored her for a reason,” he says. “She has surrounded herself with the right people and is strongly focussed on her goals, and that's something QRS really values.”