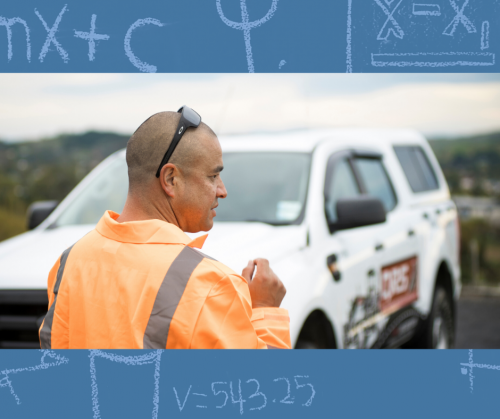 Quality Roading and Services’s Quintin Baty has earned his Certificate in Highway Engineering (Civil) and overcome a fear of maths in the process!

“Yip, failed school certificate maths twice in my teens but this time around with pure determination and hard work I got through,” says Quintin who is an asset manager.

Quintin and a QRS project supervisor Aaron Hoskin have both earned their Certificates in Engineering through the New Zealand Institute of Highway Technology this year.

The course helps prepare a student for the Diploma in Engineering (Highway and Civil) and a career in the civil engineering industry – planning, designing and constructing anything from roads to bridges to dams.

Quintin has been at QRS for two years and says he was always committed to upskilling through further education.

He took his first steps by signing up to one of the pre-qualification courses but took a backward step when he opened a maths book and saw a jumble of numbers, fractions, and algorithms.

“I had that feeling like I used to get at school. I thought what have I got myself into? It took me back to schoolboy days.”

QRS training manager Pete Wairau says it’s a common feeling for many adult learners but QRS is a company that strives to walk alongside anyone wanting to upskill and earn more qualifications.

The company offers external and internal trainers to develop the skills and knowledge required.

Quintin was given the chance to work with Literacy Aotearoa in Gisborne. Once a week he would take a 90-minute class and a few months later when Quintin came to sit the pre-qualification maths paper he aced it.

With his pre-quals completed Quintin then threw himself into his four-paper certificate studying topics such as soil geotechnical properties and highway engineering. His three-day block courses away from home were followed by assignments and a big exam at the end.

At 41 he never thought he would be in the classroom again. He was the oldest but as it turns out...he loved it!

Quintin found out he enjoyed the feeling of learning new things. He was also able to help his son with his Year 12 maths. “You have to suck it up, grind through, read, practice and learn.”

Pete and Quintin both agree it takes organisation and steadfast commitment to complete the course.

So, fast forward six months and Quintin was sitting at his desk at QRS one morning in February this year when he received the email that would tell him if he’d passed or not.

“I was expecting to fail that last exam. I got the email and had butterflies and nerves. I prepared myself to open it and when I saw how I did...I did a quiet little ‘yeah boy!’ The first person he told was his wife.

QRS chief executive Nigel Pollock congratulated Quintin and Aaron on their achievement. He remembers his own evenings slogging it out over books after a day at work in order to increase his qualifications and get to where he wanted in life.

“Quintin is right. It’s a very satisfying achievement and it’s been great to watch how Aaron and Quintin’s skills have developed.”

“All our employees have individual training plans allowing them to acquire new skills, increase their contribution to QRS and build self-esteem,” says Nigel.

“The vision is that QRS becomes a principal regional employer helping provide opportunities for the community and where possible we want to promote from within.”