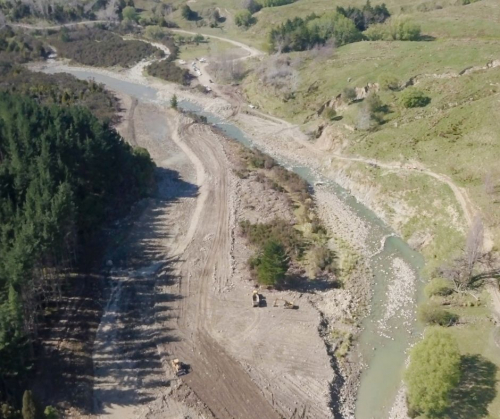 It’s more than 30 years since Cyclone Bola caused flooding in the Nuhaka River, forcing it to create a new channel at the base of a hill. Ever since then the river has carved away at the hill aggravating a massive, slow-moving slip.

As well as causing headaches for landowners and anyone else wanting access along Nuhaka River Road, engineers believed the entire hillside would eventually end up in the river, pushing the waterway into yet another route.

But now – thanks to a collaborative effort between the Hawke's Bay Regional and Wairoa District councils, local iwi, Quality Roading and Services and subcontractor Pryde Contracting -- the river has been realigned to follow its original channel.

On September 23 those groups – along with Nuhaka School students – gathered on a brilliantly sunny day to watch as a newly-dug channel was opened, the old one was blocked, and the river once again flowed along its original route.

The journey to get to that point was a long one: 32 years since Cyclone Bola; a decade since the hill started slipping; and nearly five years since iwi authority Te Iwi o Rakaipaaka gave its approval in principle for the work to go ahead.

With funding approved under the Provincial Growth Fund's shovel-ready initiative in May, the logistics had to be pulled together quickly in time for July when the site was blessed and the two months of earthworks that followed.

“The success of this project is largely due to it having been a collaboration between a number of parties all working together towards a shared goal,” says area manager Nathan Heath, of Hawke's Bay Regional Council, which commissioned the design before Wairoa District Council released the contract taken on by QRS.

“For me the cool thing is that, even with the tight timeframes, we were able to follow through with all the appropriate protocol, from ecological to cultural, to ensure the job was done right.”

The day after the realignment was complete, the Nuhaka School community was back to help marine scientist Shade Smith relocate any remaining fish and tuna from the old channel to the new. As per Mr Smith’s designs subcontractors had built rock walls in the old channel to create pools the wildlife could rest in overnight while the stirred-up sediment settled.

“It could not have gone better,” Nigel Pollock says. “The river going where it should be is positive proof of that synergy between vision, funding, design, planning and execution.”